As the Winter Solstice approaches, cooler weather and the year’s shortest periods of daily sunlight turn our attentions inward;  keeping the home fires burning, shifting menus with availability of wild foods, and sharing hot drinks and holiday traditions with loved ones.

So what have mushrooms got to do with a certain folkloric Arctic-circle dweller and his posse of flying reindeer? Well, like many customs associated with this season, these symbols have their roots in the natural cycles of our environment and the deeper exchange of universal energies as experienced and interpreted in human traditions.

If you’re lucky, you’ve seen them — Fly Agaric Mushrooms– popping up among the birch, larch, fir, pine and oaks. With the potential to be quite hallucinogenic, these are more than just great homes for Smurfs. Speculated to be the source of inspiration for the  red-and-white costume donned by “good ol’ St. Nick”, the Siberian strain is also known to cause a certain amount of “reindeer games”: in addition to a long history of known use in human cultures, other northern beasties like squirrels, deer, chipmunks, caribou, and reindeer seek out and eat the mushroom, enjoying its transcendent effects.

“In Norse myths, Odin had an eight-legged horse called Sleipnir that he rode into battle. Together they traveled through the nine worlds of gods, giants, elves [! -ed.], men, and the underworld. Because he carried Odin through the skies around Christmas in the Wild Hunt, when gifts were left for the faithful under pine trees, some authors have suggested the eight-legged steed gave rise to Santa Claus’ eight reindeer”.

In Finland, according to Rogers, a cold-water extract of rainwater collected from the cap of a mature Fly Agaric, is called “dwarves’ wine” because of its “definite psychoactive effect”.

On Turtle Island, east-coast varieties of the Fly Agaric are usually orange-yellow. 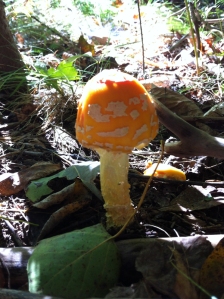 Like their cousins on the west coast and in northern regions around the globe,  local squirrels ornament evergreens with mushroom caps, for consumption throughout the colder months.

So, there you have it — Santa, elves, decorated trees, and flying reindeer brought to you with a little  mushroom magic!

Here’s to a healthy and love-filled winter season!

*This blog post should not be construed as endorsing the use of  known hallucinogens like Fly Agaric mushrooms, for any purpose. Local knowledge-sharing networks are the best and safest mechanism for confirming the identity and potential effects of any wild mushroom before consumption.

For further reading, check out The Psychedelic Secrets of Santa Claus by Dana Larsen.

We have opted to explore alternatives to the Annapolis Royal Market this year.

Contact Us to get your fill of fresh, delicious, and health-promoting mushroom products from Fundy Spores!