The snow accumulation here on the East Coast this winter was nothing short of impressive – in the surrounding forests, it has taken until just recently for there to be enough traversable terrain (sans snowshoes) to go hiking in search of overwintering and early spring fungi.

(Check out these gnaw-marks on tree branches, aprox 4 feet from the ground – small forest friends, likely rabbits, were nibbling bark at this height only a couple of weeks ago!)

As the seasons’ colours turn from the high-contrast of brilliant white, deep greens, dark browns and black, a few things pop out against the muted tones of late winter:

Pink Earth lichen (dibaeis baeomyces) is rampant in this former slate-extraction pit: as a “lichenised fungi”, it features miniscule fruiting bodies resembling the stalked mushrooms we tend to see in the fall.

In this shot, you can see it snacking on the same trunk as some gorgeous Green Stain (chlorociboria aeruginascens) mycelia.

Black Jelly Roll is also prevalent. Here, it co-occurs with what just might be panellus stipticus – we’ll have to return after sundown to see if it bears the exceptionally cool trait of luminescence (glowing in the dark) to confirm the ID! 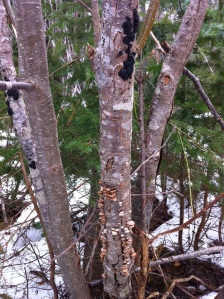 It’s fascinating to see the combinations of fungi, moss, and lichen inhabiting the same host trees, in various stages of life, decline, and decay. Come back soon for some more pictures and a post about the numerous polypores, specifically conk fungi, observed on this outing.

We have opted to explore alternatives to the Annapolis Royal Market this year.

Contact Us to get your fill of fresh, delicious, and health-promoting mushroom products from Fundy Spores!